The House approves a measure to avoid government shutdown and debt default, but McConnell is poised to torpedo it in the Senate 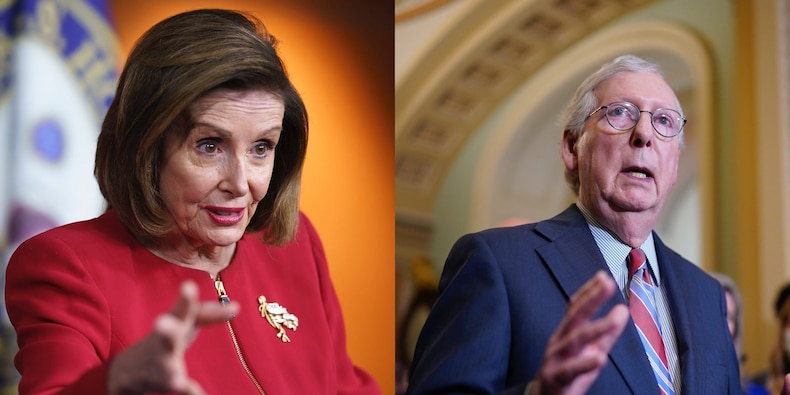 The House passed a bill on Tuesday evening aimed at funding the government past Sept. 30, and increasing the limit on how much it can borrow to pay its bills. But the measure is poised to tank in the Senate, as Minority Leader Mitch McConnell has warned many times.

The vote was 220-211. The bill would keep the government funded through December 3, setting the stage for another spending fight in two months. It also included a measure to renew the nation’s ability to pay its bills until late next year, along with $28.6 billion in emergency disaster relief funding along with federal aid money to resettle Afghan refugees in the US who fled as the Taliban seized power.

The measure stands no chance in the Senate as Republicans are lining up behind McConnell’s pledge to torpedo the measure. “The debt ceiling will be raised as it always should be, but it will be raised by the Democrats,” he said at a Tuesday press conference.

Less than a handful of GOP senators may back the measure, falling far short of ten needed for it to clear the filibuster’s 60 vote threshold. So the two parties remained in a standoff that could spiral into a government shutdown during the pandemic and potentially spark another financial crisis.

A new analysis from Moody’s Analytics laid out some potentially catastrophic consequences of a default. It could wipe out $15 trillion in US household wealth, nearly double the unemployment rate to 9%, and shed up to six million jobs from the American economy.

Republicans argue Democrats possess the ability to lift it themselves using a party-line procedure known as reconciliation, the same tactic used to shepherd a $3.5 trillion social spending bill and bypassing Republican opposition.

Sen. Shelley Moore Capito of West Virginia floated the reconciliation bill as a potential area for Republicans to demand spending cuts in a brief interview with Insider.

Democrats are assailing what they view as GOP intransigence on the issue since Republicans agreed to lift the debt ceiling three times under the Trump administration. Lifting the debt ceiling paves the way for the federal government to pay down its debt – roughly $8 trillion was added under President Donald Trump.

“I honestly don’t believe that the Republicans are that crazy that they would allow the global economy to sink into a depression,” Sen. Bernie Sanders of Vermont told Insider. “I think the irresponsibility of that is beyond comprehension.”

Senate Democrats refused to publicly offer alternatives on Tuesday, even as the clock was ticking towards a potential default within weeks. “I think leadership’s got some ideas on Plan B but I don’t think those ought to be shopped,” Sen. Mark Warner of Virginia told Insider.

“Frankly we ought to get rid of the whole legal fiction here to start with because it’s nothing but a hand grenade that irresponsible politicians pull a pin on,” Warner said, adding he would be supportive of getting rid of debt limit hikes entirely.

This story will be updated.