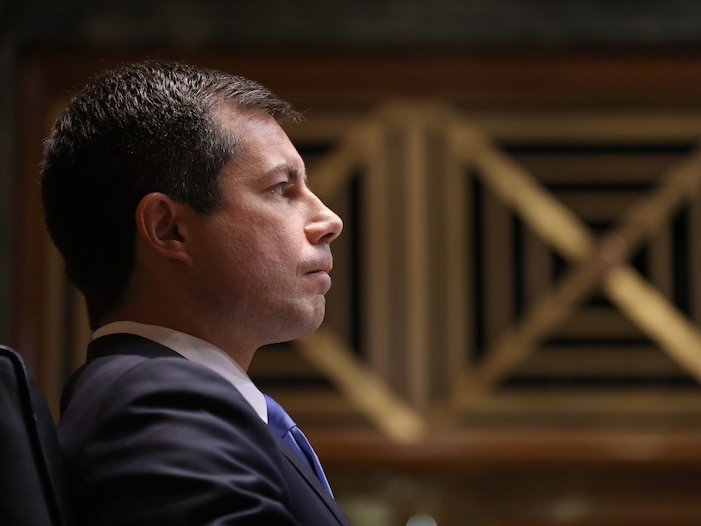 Transportation Secretary Pete Buttigieg responded to Fox News host Tucker Carlson’s mocking statement that he was “trying to figure out how to breastfeed” while taking parental leave.

During an appearance Friday on MSNBC’s Deadline White House, Buttigieg, who adopted twin newborns with his husband, Chasten, spoke of the benefits of family leave and being able to spend time with the newest members of his family.

In an Oct. 7 retweet, the secretary appeared to confirm that he had taken paternity leave.

“What we have right now is an administration that’s actually pro-family, and I’m blessed to be able to experience that as an employee, being able to have the flexibility to take care of our newborn children, which is, by the way, work,” Buttigieg told host Nicolle Wallace. “It’s joyful work. It’s wonderful work, but it’s definitely work.”

The secretary then lit into Carlson for his criticism, which was made on Thursday during the host’s primetime show.

“Pete Buttigieg has been on leave from his job since August after adopting a child. Paternity leave, they call it, trying to figure out how to breastfeed. No word on how that went,” Carlson said.

The secretary said that US leaders were doing a better job at highlighting parenting and caregiving as important work, pointing to President Joe Biden’s proposed paid family leave for Americans. He then expressed his belief that Carlson’s comments were not reflective of all right-leaning Americans.

“This is largely a consensus issue … moms and dads ought to be able to support their children including with paid family leave,” he said.

Carlson’s comments elicited backlash, with some labeling his comments as homophobic.

Elliot Imse, a spokesman for the Victory Fund, which boosts LGBTQ individuals in public service, told The Washington Post that Carlson’s dig about breastfeeding was an insult “for being a gay dad.”

“If he wanted to make an argument about taking paternity leave, he could have done that without throwing in a homophobic trope,” Imse told the newspaper.

“Proud to work in an administration that is fighting to make paid leave a reality for everyone, and with people like @SecretaryPete who are role models on the importance of paid leave for new parents,” she tweeted.

Buttigieg said that despite taking leave, he has “been available 24/7 on issues that can’t wait,” especially regarding ongoing supply-chain issues that conservatives have used to criticize him.

After his Senate confirmation earlier this year, the 39-year-old former South Bend, Indiana, mayor and ex-2020 Democratic presidential candidate took the reins of the sprawling 58,000-employee Transportation department. The agency is tasked with planning and coordinating federal transportation projects, along with overseeing transportation safety regulations throughout the country.