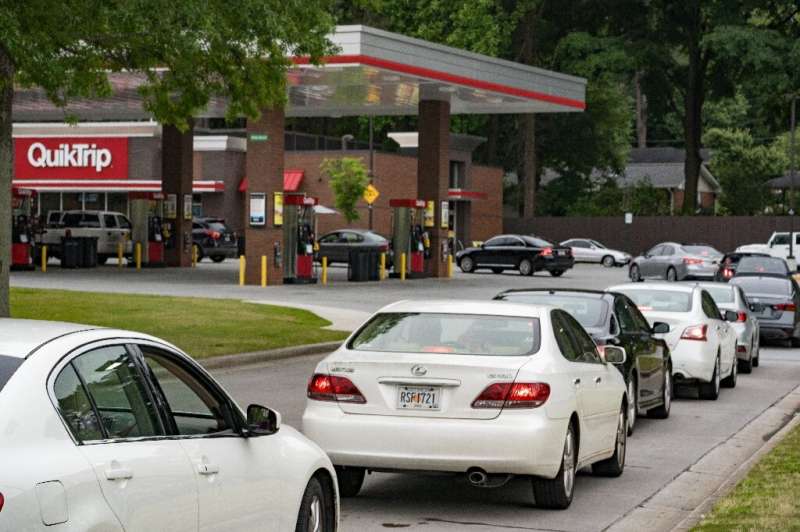 Cars lined up at gas stations in the United States after fears of a fuel shortage following a major ransomware attack.

Over two dozen nations resolved Thursday to battle collectively against the global and escalating threat posed by cyber-extortionists, following a Washington-led anti-ransomware summit.

The United States gathered the countries—with the notable exception of Russia—to unify and boost efforts to fight a cybercrime that is transnational, on the rise and potentially devastating.

“The threat of ransomware is complex and global in nature and requires a shared response,” the joint summit statement said, adding the nations “recognize the need for urgent action, common priorities and complementary efforts.”

These attacks involve breaking into an entity’s networks to encrypt its data, then demanding a ransom, typically paid via cryptocurrency in exchange for the key to unlock it.

Stronger digital security and offline backups as well as collectively targeting the laundering of the attacks’ proceeds were identified as crucial steps in the fight.

“We will consider all national tools available in taking action against those responsible for ransomware operations threatening critical infrastructure and public safety,” the statement said.

The nations also resolved to work together in law enforcement operations—which are challenging because they cross borders and require special skills—and the use of diplomatic pressure.

Although Moscow denies any responsibility, most recent ransomware attacks against the United States have been blamed on Russian-speaking hacker groups or those operating from Russian territory.

White House officials said Russia was not invited to this “first round” of talks, but that Washington has opened a separate line of communication with Moscow on the sensitive topic.

The United Kingdom, Australia, India, Japan, France, Germany, South Korea, the European Union, Israel, Kenya, Mexico, and others were among the roughly 30 that joined in the virtual gathering that ran from Wednesday to Thursday.

During the summit nations recounted their agonizing experiences with cyber-extortion, including a digital “disaster” declaration in Germany and Israel even announcing a blitz was underway against a major hospital.

Washington has sought to crack down on a sharp rise in attacks, including issuing its first sanctions against an online exchange where illicit operators have allegedly swapped cryptocurrency for cash.

The attacks on a major US oil pipeline, a meatpacking company and the Microsoft Exchange email system drew attention to the vulnerability of US infrastructure to digital pirates.